the table rounde, at Winchester

I came to Winchester by train on a cool July morning in a season that had not yet decided to be summer.  After a wonderful week of lectures on the History of Cartography with Catherine Delano-Smith, and rich sessions in the British Library map room with Curator Peter Barber, I was breaking out of London.

A key sight at Winchester is the massive Round Table, displayed in the Great Hall, and that has been part of the town’s history for centuries. 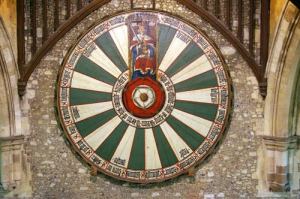 Probably no greater icon of the Arthurian story exists than the Round Table, a symbol of Arthur’s sense of fellowship and nascent democracy. In the 1958 musical Camelot the Round Table is presented as an inspiration of Arthur’s to promote the principle of democracy. This sense of the Round Table has its source in Wace’s 12th century account in which the round table is a symbol of knightly equality. John F. Kennedy loved the play and its democratic idealism. I’ve looked for a link on YouTube but haven’t found the scene in which Arthur announces rapturously, “I’ll build a round table!” Monty Python, of course, has a more ridiculous interpretation.

But in Malory’s story, the ‘table rounde’ was a wedding gift from Guenevere’s father to Arthur in celebration of the marriage. And there is a sense in the Roman War account that it is a convivial dining table for hearty feasts.

By Malory’s time, there was indeed a round table in the city of Winchester which carbon dating has shown to have been made from wood from around the 13th century. Although not nearly as old as the presumed time of King Arthur (approximately 6th century), it was impressive enough even in the 15th century to inspire association with the King Arthur legend. In the time of King Henry VIII (1509-1547), just 50 years after Malory had written his great Arthurian story, the table was painted in the scheme that is seen today: a bold green and white patterning with the names of famous knights of the Arthurian court. The massive table is hung at one end of the Great Hall in Winchester, a 13th century hall built for Henry III upon the earlier site of Winchester Castle. The symbol of companionable dining has shifted from its original horizontal plane to a vertical-plane art object, a symbol of political association between the city of Winchester, Tudor kings, and King Arthur. (Again, see Jon Whitman’s excellent essay on the political associations of the Round Table at Winchester mentioned in my previous post). There is also a lovely side garden dedicated to Henry III’s wife, Queen Eleanor of Provence.