Hit befelle whan Kyng Arthur had wedded Quene Gwenyvere and fulfyled the rounde Table, and so aftir his marvelous knyghtis and he had venquyshed the most party of his enemyes . . . And held a ryal feeste and Table Rounde with his alyes of kynges, prynces, and noble knyghtes, all of the Rounde Table . . . (113)

This is the opening of the Roman War tale.  Arthur and Guenevere have recently married and all the members of the Round Table are gathered to celebrate both the young king’s wedding and his consolidation of power across England.  In Malory’s tale, the location of the royal feast is not specified, but in looking back to the previous tale, Arthur (“the flower of chivalry”) was holding court in Camelot, welcoming back his adventuring knights:

And so within twelve days they come to Camelot, and the Kynge was passing glad of their commyng, and so was all the court. Than the Kynge made hem to swere upon a booke to telle hym all their adventures . . .  (111).

Into this scene of merriment and storytelling, the ancient ambassadors of Rome intrude, bringing the threat of forced submission to Rome.  But where, exactly, was Camelot? Over the centuries, various sites have been suggested:

Malory struggled with this question himself and resolves it in favor of the city of Winchester, mentioning several times in his book that Camelot was at “that tyme called Wynchester” (61, 598, 600)* 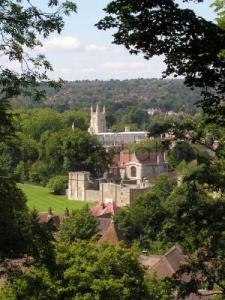 In Geoffrey of Monmouth’s 12th century version of the Roman War tale, The History of the Kings of England, he clearly states that the royal feast is held at Careleon (and that the time of year is at Pentecost; Malory implies it was a Christmas feast).  To add a bit to the confusion, in Malory’s version of the Roman War account, he states that once Arthur rebuffed the ambassadors, they departed “fro Carleyle . . .” (117).* (For a succinct argument in favor of Carlisle as the northern candidate for the site of Camelot, see David Nash Ford’s essay on the Britannia History website. ) 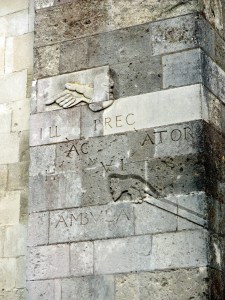 I followed Malory’s indication and went to Winchester.  I had been to Winchester the previous year where a carving I had seen began to work upon my imagination.  I returned to the Cathedral to take photographs of the pointing hands (known as “manicula”) carved into an exterior stone wall and to think about the connection to the manicula that are in the margins of the Malory manuscript, spectacularly discovered in 1934 at Winchester College, a private boys’ school near the Cathedral.

On several counts, then, Winchester is an important literary home of Malory’s great tale:

One can see why Malory would have favored Winchester as a possible site of Camelot— it is the perfect mingling of English and Roman military grandeur that would seem the right fit for the fifth century Arthur.  By Malory’s time, in the mid-1400s, traces of the former Roman presence still remained–evidence of a Roman fortification on St. Giles Hill and beautiful roman floor mosaics, still visible today. The name Winchester itself seems to arise from a mingling of English and Roman cultures: the older form, Wintanceaster—is a combination of the Latin word “Venta” (perhaps meaning market) and “ceaster,” the Old English word for fortified town .

Rushing through the Waterloo train station in London to catch the train to Winchester, I glanced up and caught the light, angled like the revelation of divinity, streaming across the station concourse, alive with particles, turning dust to dreams.  Amid my own personal uncertainty, came sheer happiness—Winchester bound.

*All quotations are from Le Morte Darthur, edited by Stephen Shepherd.